guru-śisya-paramparā – Self-knowledge passed down from guru to student to help remove beginningless ignorance; cause of rebirth in saṃsāra. Then shift ‘I' from false body-mind to truth of self, Brahman.

Yes Vedanta purpose is to protect and elaborate the original message of Advaita Vedanta — and how to sensibly apply it in modern times.

Vedanta is not a philosophy. Not a school of thought. Not a system of beliefs which can be negated from different angles. Not a set of contentions.

It is a means of knowledge (pramana) which establishes absolute clarity of reality. Which comes through your own self-inquiry in light of the methodology — carefully unfolded by the teacher.

The methodology reveals the truth of self which we miss owning to beginningless ignorance (avidya).

Avidya causes us to seek reality as though it's separate from me. Thus one attempts hundreds of practices for decades, hoping to discover something bigger.

It's like never finding the pen because it's sought everywhere but it's one true source, the ear. It was never away from me.

Similarly, no amount of effort can reveal the absolute reality (Brahman). Because effort or technique implies “I am not the reality right now, and I need to DO something to become the reality”.

Imagine a chair meditating for years, hoping to discover itself as the wood. Yet it's entire being is made out of the wood which is also the reality of the entire wooden universe.

Nor can the word become the ink. Because it's already pervaded by the ink. Thus any word's attempt to attain the ink will fail. For this reason, the final reality can only be pointed out by an ācārya through Vedānta pramāṇa.

For this reason,, our classes are taught according to traditional Vedanta — as originally expounded by Adi Shankara.

And frequent use of Sanskrit words is employed for preserving the Vedantic Indian tradition. Because advaita (non-two) taught in English-only is insufficient to communicate the full vision of oneness.

“Traditional” Indian Advaita Vedanta has nothing to do with western Advaita. IE: The passive listening satsangs on non-duality.

How to identify? Most emphasis is on “self / not-self”. Sharing feelings or down-to-earth family affairs and emotions is typically discarded as “an illusion arising and dissolving in consciousness”. No Sanskrit language. No scriptures. Trivial emphasis on devotion or love-for-all (bhakti) – without which results in subtle spiritual superiority or arrogance. Topic of “God” (Ishvara) is either avoided or vague. And dharma (personal duty to family/society) is omitted.

Such style doesn't acknowledges that Advaita (non-dualism) is strictly of Vedas. Also verse or text which contains the concept is unmentioned. This causes listeners to unintentional glorify the guru, thinking all examples are his.

In truth, all examples come from Vedas (source of Upanishads) from India. It is duty of every teacher to acknowledge and protect the source — just like father's duty to protect his son being spoiled by immorality from other uninformed school children.

Partial knowledge leads to intellectual superiority and snobbish attitude like, “I am beyond this world. I am Enlightened! Why pray to forms? That guru is NOT enlightened! Free-will is an illusion“. One becomes a spiritual judge, adjudicating what is what.

Why else aren't spiritual seekers progressing fast enough? A beginner often has a need to get involved in multiple schools of thought. This creates contradictions about various terminologies and promotes an intellectual pursuit, rather then actual life transformation. Mixing schools is like a 5 year old left alone in a candy store. 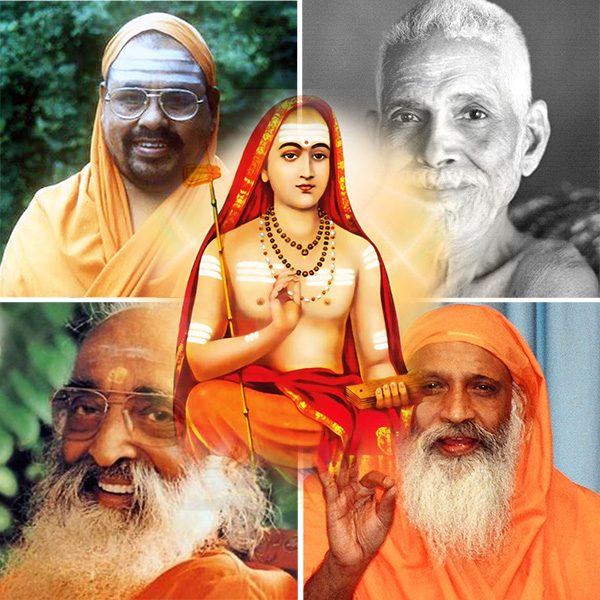 Yes Vedanta only presents the purest Self-Knowledge from original Sanskrit to English, as presented by our greatest sages. It is not over-simplified nor partial.  Teachings are detailed and structured step-by-step.

Yes Vedanta is not an institution, nor a business, nor donation-dependent. All classes are free. Teacher is financially self-supported.

No race, gender, religion or nationality is excluded. Only your sincerity, regular attendance and attention is required.

Other personal teachers studied from…

My first introduction into proper Advaita methodology was through James Swartz. His contribution Westerners (outside Indian) is restoring purity of traditional unspoiled Advaita Vedanta and emphasizing the importance of staying within boundaries of an unbroken lineage.

Neema Majmudar excels in applying the Vedic wisdom into modern down-to-earth practical living. Her strength is a fine balance between intellectual need to firmly grasp, and the emotional need to “feel” the knowledge in one's life. 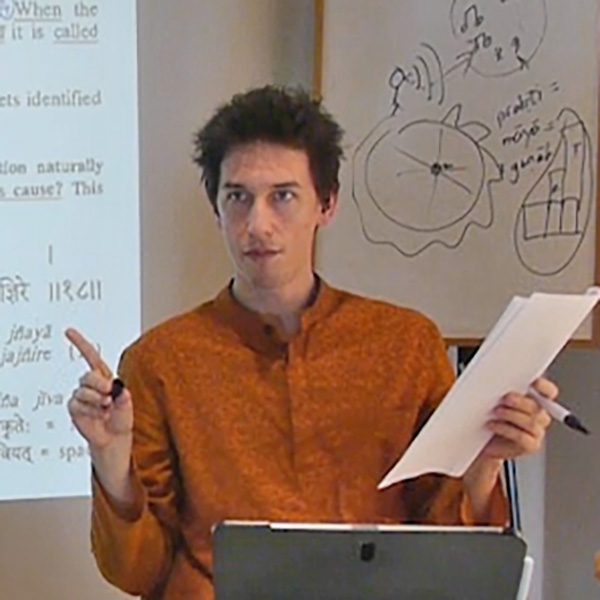 Class involves listening to and contemplating Upaniṣadic declarations on what is Real/Unreal. Result is clarity & objectivity.

“Shortly after achieving financial freedom by early twenties, an unsettling inquiry grew pertaining to impermanence of financial security, friendship, world exploration and self-help. “How will more make more difference and to whom?“, I thought. Nature of questions eventually turned to the subject ‘I'. One day an urge compelled me to visit Arunachala to pay respect to Ramana Maharshi. Attracted to a 25 day program nearby on Bhagavad Gītā by James Swartz – and unceasingly persisting with prescribed inquiry for months later – the first dawn of self-knowledge ensued. Clarity was further elucidated through participation in Chinmaya International Foundation (Kerala, India). Finally meeting Neema Majmudar (of Swami Dayananda Saraswati, Arsha Vidya) – her style meticulously expounded the vision of Reality and meaning of not-two (advaita). The definition of ‘guru' came fully alive upon meeting her. My sole life purpose is to protect and disseminate the saṃpradāya of Advaita Vedānta as highlighted by Ādi Śaṅkara.”

“ After finishing school – personal improvement and psychology was love-at-first-sight. A treasure which had to be explored. Possibility of becoming better was irresistible. It supported the vision of family's tradition: find a wife, have children and provide them a safe happy environment.

Although looking back, exploration was motivated out of insecurity. Silent voice of inadequacy was the foundation. Either way, it was enough to cultivate analytical and creative thinking. Leading to early financial independence.

However decent success in early 20's raised suspicion in form of inquiry. I began to notice the impermanence of financial security, friendship and self-help benefits.

All of it was like a high that wore off quickly.

So I thought, “There seems to be no ending to any of this. Why this constant drive to achieve more? Why am I not at peace with what already gotten? How will MORE, make more difference, and to whom?”

This was the entry point into the vast ocean of spirituality that was pursued for next 8 years.

Again, just like the former years of worldly successes, peak performance and inner psychology… the underlining unfulfilled-I, didn't go away even in spirituality. Meditation and practices quickly wore off upon re-entry into atmosphere of ordinary day-to-day living.

Eventually an urge compelled me to visit Arunachala to pay respect to Ramana Maharshi. There I came across James Swartz who was unfolding essence of Vedanta for 25 days. Program was about 70h in total.

After hearing the program magnificently expounded step-by-step… I stuck with it by mere faith that what Bhagavad Gita and Upanishads are saying — must be true. Despite initially having no proof that Vedic authority was superior to other methodologies.

Returning home, I invested another 900+ rigorous hours for the next 8 months in uninterrupted immersion… studying in detail and inquiring into the teachings of the B.Gita as taught earlier.

Self-knowledge that took place with absolute clarity was further elucidated through involvement in Chinmaya International Foundation (Kerala, India) courses for the next 2 years.

At the same time I was introduced to Neema Majmudar. Her style meticulously expounded the vision of Reality and meaning of not-two (advaita). Upon meeting her, the definition of “guru” came fully alive for first time in my life. Only then I understood the infinite value of the guru-śiṣya-paramparā (teacher-student relationship).

Today, my average day consists of 10-15 hours of Vedānta/Sanskrit study.

Clarity doesn't occur instantaneously as falsely imagined. For example, do you get a promotion in company overnight OR it's result of years of prior hard work?

If nature bypasses a season… the food chain collapses.

There's no skipping inherent laws which can't be broken.

A mind yet to understanding the bigger picture of life alone entertains “I want to bypass!”.

For this reason, ongoing self-inquiry and continued study of śāstra (vedic scriptures) is required to remove false notions denying happiness.

Most dislike hearing this because mind holds the portrayed image of “Buddha sitting under a shady tree who attained Enlightenment in one extended sitting session“.

Matter of fact, it's symbolic of his immense PRIOR EFFORT and BURNING DESIRE for liberation.

Whereas majority seekers, secretly keep one foot in world and another in Liberation. Then lament, “I'm not the chosen one. I'm not up to this. It isn't working for me! Not in this lifetime”.

Even after gaining self-knowledge from guru/teacher… dissatisfaction may and likely will arise from childhood love-issues and lifetimes of impressions.

Moksha (liberation) is not like winning the lottery. Such false ideas are nowhere mentioned in Vedic literature.

Therefore only with patience and perseverance is one's success mathematically predictable. 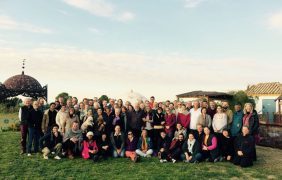 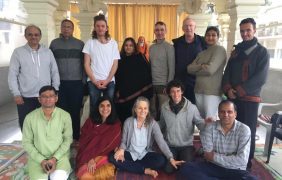 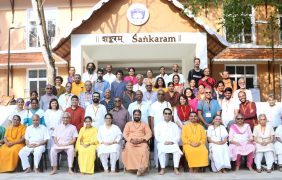 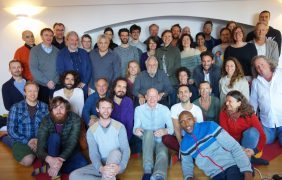