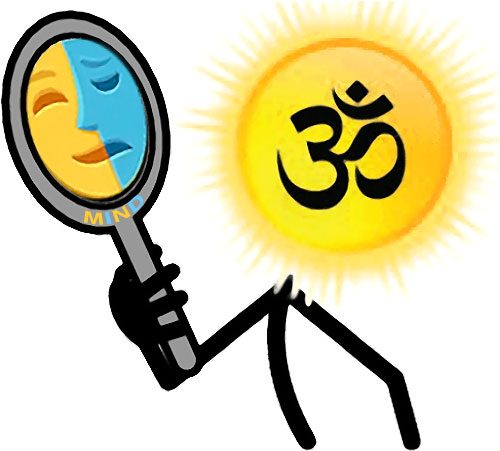 Teacher explained there is no question of two-ness.

Just like the skill of singing is never away from the conscious person in whom that potential rests.

Even when the singing power projects outwards, the person can't be reduced to a single definition of a singer.

Therefore when he wields his power of signing, both the singer and the singing become an indirect glory of the one conscious entity.

Whatever name-form and worship we attribute to the music… we're only ever speaking of his potential power that was existent even before the singing began.

In this way every melodious note is a dependent-reality… a superimposition… a projection over the person.

And when the singing ends, the singer role resolves from whence it came – the one same conscious being (puruṣa).

Thus there's no question of two different entities. There is only One in whom potential resides and manifests outwards when circumstances are appropriate.

In the same way, whatever reality māyā, the limitless potential, has – it is entirely dependent on the Limitless One (brahman / consciousness).

In fact māyā is the Limitless One. Just how the pot name-form is actually the clay.

Whatever reality the pot thinks it enjoys, it cannot get away from it's truth, the clay.

Whatever thoughts and doubts the pot has about it's nature, those too are made of the clay alone.

The pot is helplessly the clay already. It only suffers when it has not taken the time to inquire, thus recognize how that is the truth right now.

The student asks “Māyā, inseparable from the Limitless One, is also the source of our ignorance. The All-Pervading Consciousness must be affected by māyā's presence. It surely must eclipse the Limitless One!”

” We have explained before māyā's ontological status. It is mithyā, a dependent-reality. It cannot connect with the real.

Where is the question of eclipse?

Did the snake or silver projection affect the rope or shell?

The Limitless One is all there is.

Māyā being mithyā, has no real existence.

It is the cosmic power, insentient and dependent on the Limitless Consciousness.

It is the source of our ignorance.

How can an apparent existence hide the intrinsic truth? It cannot.

Rules of māyā stop with our minds, belonging to the same ontological status.

Just as earth and all opinions on it – touches not the sun. We all depend on. It doesn't depend on us. No sun, no life.

The One Consciousness reflected through our minds, makes us aware of both, knowledge and not-knowing-ness.

How can it hide the One who wields it?

It maya really veils Consciousness, there can be neither knowledge nor existence… since we derive our being and intelligence (capacity to know) – from the Limitless One.

Just as a mirror shines again – wiped clean of its dust and grime.

Or a piece of sandalwood lying in a stagnant pool, it's fragrance forgotten. But once it is cleaned, it's perfume wafts up again.

The loss was apparent as was the gain of it's natural scent.

Veil of ignorance, a dependent-reality – dissolves in the presence of knowledge. Thereafter the ever present, never absent self-revealing light is revealed as the very self (ātmā).

Mind is inanimate matter. Limited by time and space. Limited by it's capacity. If it knows one thing, it cannot know another at one and the same time.

Ignorance is therefore present from the dawn of creation. We are born ignorant. Our experience proves it.

But with every piece of knowledge, the corresponding ignorance vanishes.

A peeling away of layers.

A step by step process which an alert mind can witness, aware of the disappearance of a particular not-knowing-ness.

Just as searchlight reveals the objects of it's focus – leaving the rest in darkness.

A play of light and shade.

A mixture of knowledge and ignorance.

Similarly our mind, subject to maya's force, bound by the laws of the world – has both knowledge and ignorance. “

“Our minds are products of māyā. Has can insentient products gain knowledge of the Limitless One?”

” What we call a mind is like a mirror that acts as a lamp – despite having no light of it's own.

It lights and brings to life the mind and it's activities, memories, stories, values, beliefs, education, ignorance.

Consciousness, like the sun, remains unaffected by what it illumines.

It is the mind that varies, tossed about by it's tendencies and memories. (saṃskārās/vāsansās)

A dust-covered mirror cannot reflect clearly. No more then a convex or concave mirror give a true picture of an object.

The mind is no different.

We use our reflection, despite the reflection's dependent-status – to see ourselves in the mirror.

Similarly, despite the mind's dependent-reality, it serves to understand and know the truth of the Limitless One and I. “

Conversation in part 26, student brings up a clever argument. Since everything is One – then if one person understands the Truth, then entire universe should ALSO understand and be released from ignorance!